About the only positive things that the network had going for it were fairly decent network wiring and excellent on-hand staff, including Marco Figueiredo, assistant director for IT & Operations at Syracuse University London.

Timing can be everything, and after the ITS site visit, a number of favorable factors lined up. British Telcom increased its available Internet connections while lowering subscription costs. A fairly new networking company called Meraki had just introduced a cloud-managed, easy-to-support product line that would prove to be a perfect fit at SUL. And ITS senior leadership was willing to take a chance on the new Meraki paradigm to extend the Syracuse University network “across the pond” to London.

Working with the rest of Network Design and Development (NDD) and Joncas’s Active Directory team, I traveled to London for three long days of working with Marco to overhaul the network. It was a fairly ambitious outing as Marco and I had to meet for the first time, purchase some basic tools and map out the wiring in the two buildings that make up Faraday House.

Three days later, 35 wireless access points and a couple of hundred wired workstations were in service. The same AirOrangeX and wired desktop environments that we all use on home campus is present at Faraday House. The outing was an unqualified success, as detailed in this Meraki case study.

Since then, Syracuse University’s London campus has been just another highly reliable segment of the University’s overall networking domain. Trouble tickets have been almost at statistical zero. When there is something to figure out, Marco has the backing of all of ITS and the rest of the University’s computing resources. Together, we’ve been able to do a full life-cycle update to the original network project. The flexibility of the cloud-managed Meraki model allowed NDD to provide a plug-and-play paradigm for Marco and his team to modernize the network again in 2019, without requiring anyone from ITS to be on-site.

There is no learning curve whatsoever for students or University leaders who travel to Faraday House. Between Syracuse University students, faculty and staff, along with visitors from other schools around London, it’s not uncommon for Syracuse University London to serve as many as 1,000 daily network users between the LAN and WLAN, again with the same Active Directory and secure wireless experiences as home campus.

Although COVID-19 has also forced changes at the Syracuse University London campus, the long-distance partnership remains strong as we all adapt and plan for whatever comes next.

Three months ago, more than 80 students gathered for the CyberStart launch party. Among those attendees was College of Engineering and Computer Science graduate student Weiling Wang, who enjoyed some pizza while cranking through the online cybersecurity challenges. More than 119,000 points later, Wang is the CyberStart champion at Syracuse University. 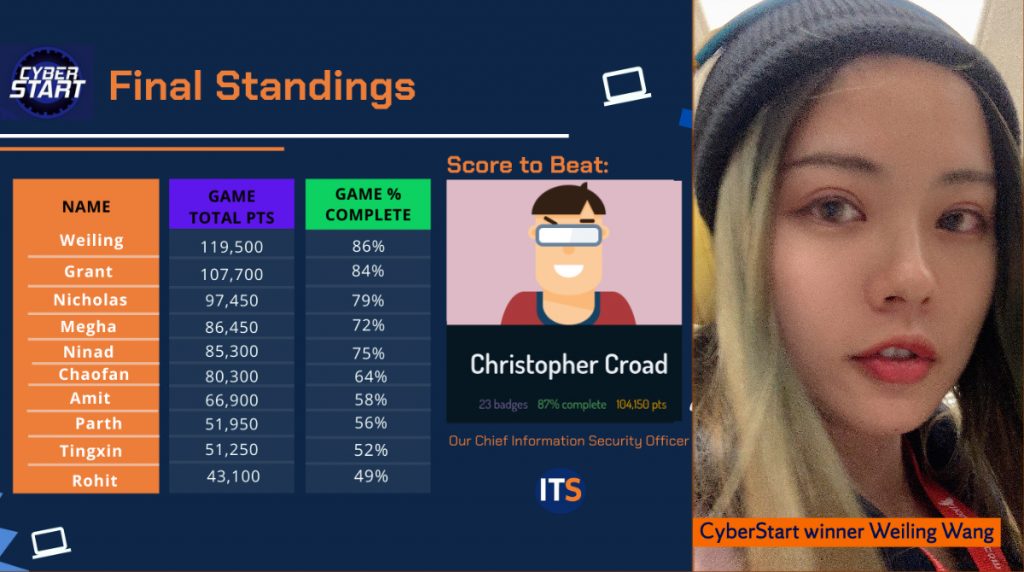 CyberStart is a program funded by the National Science Foundation (NSF) and developed by the SysAdmin, Audit, Network and Security (SANS) Institute to identify and train the cybersecurity professionals of the future. The online game offers students the opportunity to learn more about the cybersecurity profession, test their problem-solving skills and learn new technology.

Syracuse University was one of just nine schools selected by the SANS Institute to participate in the CyberStart program. Chief Information Security Officer Chris Croad partnered with Professor Shiu-Kai Chin from the College of Engineering and Computer Science to bring CyberStart to campus.

“From my perspective, the Cyberstart program has been a huge success just in the number of students who took part,” Croad says. “The game was really challenging in the higher levels, and I was thrilled to see Weiling and others do so well. I hope we have the opportunity to work with some of the players through paid student positions in our Security Operations Center.”

Wang enjoyed the variety of challenges CyberStart offered. “It includes web security, cryptography, forensics and coding, which I learned from my courses,” Wang says. “I am good at the forensics part, like extracting information from pictures or analyzing the logs and memory. I highly recommend Kevin Du’s computer security course, which is very helpful.”

Throughout the competition, Wang checked in on the scoreboard but “had no idea” she would win. She was “excited and surprised” when she learned that she finished in first place.

“CyberStart reinforced my enthusiasm and passion for cybersecurity,” Wang says. “After [CyberStart], I also participated in some other capture the flag competitions. What I learned from these competitions will help me pursue my career in cybersecurity.”

Congratulations to Weiling and all of our CyberStart participants!

Over the past week, many University community members have received scam email commonly referred to as “sextortion.” END_OF_DOCUMENT_TOKEN_TO_BE_REPLACED

While the Syracuse Orange are well-known for their athletic prowess, there’s a new team on campus making noise in cybersecurity competitions. The Sentinels, a team of student-employees from the ITS Security Operations Center (SOC), recently participated in the National Cyber League Spring 2020 Team Game and finished 33rd out of more than 900 competitors. END_OF_DOCUMENT_TOKEN_TO_BE_REPLACED

In a very special episode of Behind the Monitor, we weigh the pros and cons of Zoom, tell you how to spot a phishing scam and discuss whether pizza belongs on pizza. You can subscribe to the podcast on Spotify.